Austin is now the first city in Texas to regulate paid sick leave as a result of Austin City Council’s approval of an ordinance on February 16, 2018, that mandates all private employers in the city to offer their employees paid sick leave. Depending on the size of the company, employees must be provided with at least six to eight days’ paid sick leave. The law applies to all of Austin’s circa 13,500 employees, which include temporary employees who receive no paid leave at present. The ordinance is due to take effect on October 1, 2018.

Employees who work shifts in places like bars, coffee shops, and restaurants who traditionally rarely receive paid sick leave will be covered by the Austin, Texas sick leave law. If employees work in the private sector on a full-time, part-time or temporary basis, they will be eligible to earn one hour of paid sick time for every 30 hours they work. The employee can use the sick leave to care for themselves or for family members.

Although the Council voted 9-2 in favor of the ordinance, The Austin, Texas sick leave law has both strong support and opposition.

It’s reported that the majority of the 300 people who testified in relation to the proposed law were in favor of the sick leave proposals. Supporters declared that the ordinance would have a positive impact on the city of Austin. Council Member, Greg Casar, who was a sponsor of the law, stated:

“Our ordinance recognizes that everyone gets sick and that no one should have to choose between their job and taking care of their health. We are driving forward an ordinance that protects everyone.”

“We have structures in place that say … who lives and who dies, who has health care and who doesn’t have health care. This has all been about organizing people around reducing that inequality. By passing this ordinance, if somebody works for a company and somebody else works for another company, there isn’t some people with paid sick days and some people without.”

Council members, Ellen Troxclair and Ora Houston, voted against the new laws and advised that the expense of enacting the new measures was not properly considered.

Small business owners and business interest organizations also registered their dissent, stating reasons such as a lack of clarity around the financial implications and that the law is a solution to an unrecognized problem.

A total of 137 local businesses showed their opposition to the law by signing the Austin Independent Business Alliance (AIBA) list against the ordinance. Rebecca Melançon, Executive Director of the AIBA, explained why she was against the new law:

A number of state legislators stated that they would raise a challenge to the new law on the grounds that it would cause damage to small business. Ellen Troxclair, a Council member who voted “no” to the law, has commented that she would enthusiastically support state-level efforts to withdraw an ordinance that “was really unfortunate for so many reasons.” 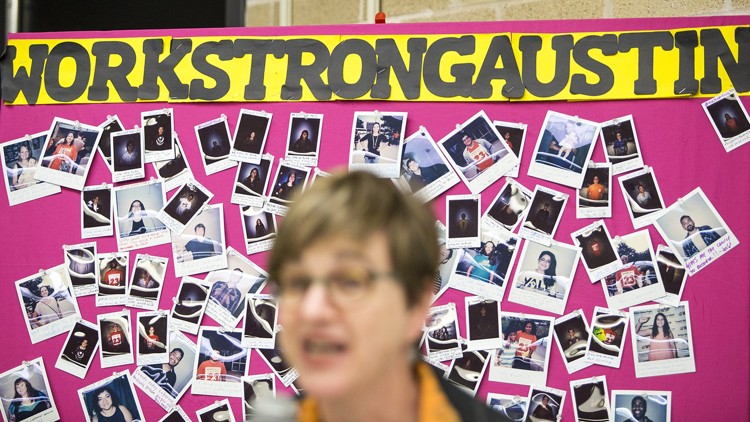 When does the Austin, Texas paid sick law come into effect?

Who is covered by the Austin, Texas paid sick law?

How employees can earn (and use) paid sick leave under the new Austin, Texas law

The accumulation (and the carryover) of paid sick leave

The size of the employer will determine the amount of paid sick leave an employee can accumulate:

Employers are not obligated to give employees more than the mandated number of paid sick days in one year. Where an employee is rehired by the same employer within a six month period, the employer must restore the employee’s previously accumulated sick time.

For what reasons can employees use paid sick leave under the new Austin, Texas law?

Employees can use earned sick time for the following reasons:

A family member, as defined by the Austin paid sick leave law includes an employee’s “spouse, child, parent, or any other individual related by blood or whose close association with the employee is the equivalent of a family relationship.”

How much notice must employers receive from employees when asking for paid sick leave?

Employees must make “timely requests” before they are scheduled to work in order to have time off under Austin’s paid sick leave law. Provisions have been made for exceptions to the necessary notice period in unexpected circumstances. Employees don’t need to find replacements to cover their hours when arranging and using earned sick time.

Employers will be obligated to retain specific records to show compliance with Austin, Texas’s new sick laws. The records and documentation that should be kept by employers include:

Employers aren’t allowed to retaliate against employees who have reported a violation or are taking part in an administrative proceeding in relation to Austin’s paid sick leave law.

How will Austin’s paid sick leave law be enforced?

The City of Austin’s Equal Employment Opportunity and Fair Housing Office (EEO/FHO) is in charge of enforcing the new law. Employers will be liable to pay a fine of up to $500 per violation if they fail to comply with Austin, Texas sick pay leave laws. The EEO/FHO has the power to provide a 10-day grace period to employers to willingly meet the terms of the law before applying a civil penalty.

What should employers do to comply with Austin, Texas new paid sick leave laws?

Since Austin is the first city in Texas to ratify paid sick leave, employers need to be prepared to be fully compliant before October 1, 2018. Employers’ preparation should include using a workforce management solution to satisfy some of the paid sick leave law requirements. Other features should include:

For record keeping purposes, an employer’s workforce management tool should be capable of retaining records indefinitely so that, if an accusation of non-compliance with the paid sick leave law is made, the employer can readily and easily provide evidence of compliance.

Austin, Texas’s new sick leave law doesn’t require employees to arrange cover when taking paid sick leave. This means that the responsibility will fall on employers to ensure that their business is adequately covered. Again, a fit for purpose workforce management tool will make it easy to suggest a suitable cover for the employee who is taking paid sick leave according to criteria such as pay grade, skill level, and whether overtime will be triggered.

If your business is affected by Austin’s new paid sick leave law, sign up for a free trial to see how Deputy can help to keep you on the right side of the law.