In our recent Australia On Time report we analysed over 400,000 shifts started in 2015. And we uncovered a startling statistic: 40% were started late.

So it’s clear a lot of Australians are struggling to get to work on time — making it a major workplace challenge for workers and employers alike.

Though slightly offset by employees starting work early, the figures for lateness could represent significant productivity losses for many Australian businesses.

In this post we delve into the reasons workers give for turning up to work late and suggest some ways you can help improve attendance and time management for your team.

Question: What’s the biggest challenge for your workers in getting to work on time?

We asked Deputy customers across Australia to identify the biggest challenges their workers face in getting to work on time. 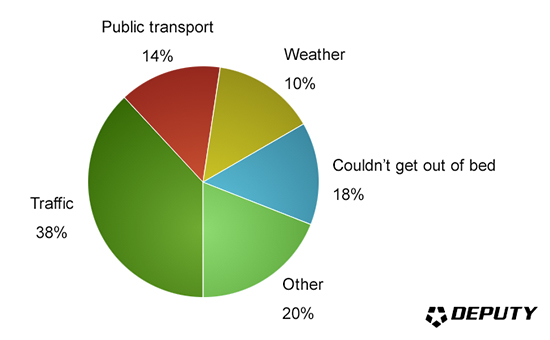 Public transport issues, from inadequate numbers of buses or train carriages to congested roads, have become a depressing familiarity for many of us. In cities where population increases have only been outstripped by rises in house prices near the centre many Australians that have moved out to more affordable suburbs are facing longer and tougher commutes to work.

In fact, congestion could cost the economy $53 billion a year in lost productivity reported Infrastructure Australia recently; while Roads and Maritime figures show average speeds falling by up to 20 km/h for many commutes in Sydney since 2013. Melbourne fares little better.

The plan claims improved road and rail connections will help cut the commute to 30 minutes for most city dwellers. While a shorter commute is a beautiful idea to many, it’s not going to happen according to Alan Davis (editor of The Urbanist). He says “Smart Cities” is a little too light on detail and more a PR exercise than real policy document.

Even if a government eventually gets transport planning right, we’re in for a long wait.

So what can businesses do to ease the burden on their employees in the meantime?

Flexible working policies can result in happier employees, improved productivity and increased  retention of workers. Giving employees more flexibility around shift start and end times might lessen the chance of them being caught up in the daily rush hour, reduce delays and improve productivity for your business.

With worsening road congestion in our major cities many Australians still refuse to switch to public transport. A recent report by ARRB (national advisor on roads and transport) revealed that most Australians would rather drive to work earlier or leave work later to avoid congestion. Only those aged between 18 and 24 are more likely to switch to public transport. If your business is nearby rail links it may be worth encouraging your employees to ditch the car and look at other ways to commute.

Does it matter so much when someone starts? Or is it more important how well they work once they arrive? Some businesses are happy to accept floating start times day-to-day: 44% of the 3,000 US hiring managers surveyed by CareerBuilder in 2011 said they didn’t care if their employees were late as long as the work was completed on time and with good quality.  If your employees arriving late doesn’t directly affect your operations you might look at embracing the move toward more flexible working arrangements.

The science we all knew to be true has been confirmed: “active” commuting (cycling / walking) is a great way to boost the health and well-being of workers. A 2014 UK study of 18,000 commuters found improved levels of psychological well-being among people who cycled or walked to work compared to those that drove or took public transport. Not only does active transport make for happier, more engaged employees, it also cuts the time lost on gridlocked roads and has none of the random delays of public transport. Look at getting that bike rack installed at your business soon!

Accept that if your employees live a distance from the workplace they may be a little later to work occasionally. Watch out for creative stories spun by people tired of giving the same old ‘missed-the-bus’ excuse.

Here are some of the more outlandish stories told to Deputy customers by their employees in recent months (and none include traffic and public transport):

2: Got hit by a car because I was checking someone out
Submitted by: Marvell Street Coffee Roasters, Byron Bay, Australia

3: Had to help my husband finish building the patio
Submitted by: Gigis Cupcakes. Lafayette, USA

4: The parking lot was crazy
Submitted by: Hands In Motion, USA

The post Why are so many Australians late to work? appeared first on Deputy.